How jam and jelly is made 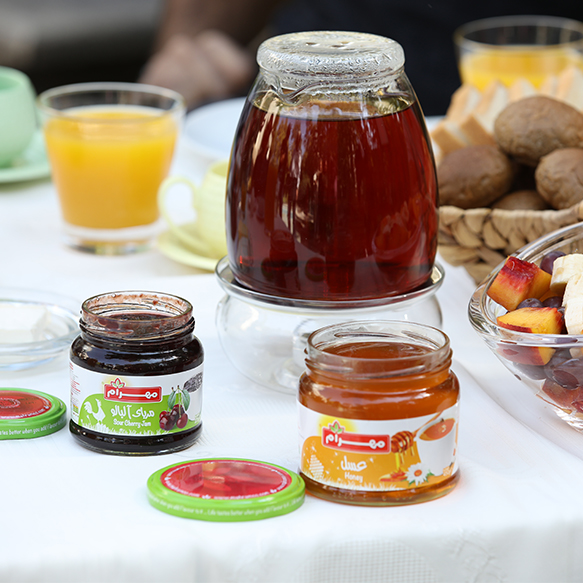 Jams and jellies are spreads typically made from fruit, sugar, and pectin. Jelly is made with the juice of the fruit; jam uses the meat of the fruit as well. Some vegetable jellies are also produced.

It is difficult to pinpoint when people first made a fruit spread. Ancient civilizations were known to set a variety of foods in the sun to dry in order to preserve them for later use. One of the first recorded mentions of jam making dates to the Crusades whose soldiers brought the process back from their journeys in the Middle East.

Preserving foods was a home-based operation until the nineteenth century. Even today, millions of people make fruit preserves in their own kitchens. Whether in the home kitchen or in a modern food processing plants, the procedure is essentially the same. Fruits are chopped and cooked with sugar and pectin until a gel is formed. The jam or jelly is then packed into sterilized jars.

Spoilage prevention is a major concern for both the home and the commercial jam producer. An important innovation in food preservation occurred in 1810. Nicolas Appert, a French confectioner, determined that by filling jars to the brim with food so that all air is expressed out and then placing the jars in boiling water would prevent spoilage.

In the early 1800s in the United States, the country was experiencing a surge westward. Of the many legendary characters to emerge during this period was John Chapman, better known as Johnny Appleseed. A nursery-man from western Pennsylvania, Chapman walked through the Midwest planting apple orchards. His purpose was to provide crops for the coming pioneers.

One of those pioneers was Jerome Smucker of Ohio who used Chapman’s apples to open a cider mill in 1897. Within a few years, he was also making apple butter. Smucker blended the apple butter in a copper kettle over a wood stove. He and his wife ladled the apple butter into stoneware crocks. She then sold it to other housewives near their home in Wayne County, Ohio.

After World War II, food scientists developed the process of aseptic canning: heating the food and the jar or can separately. For sensitive foods such as fruits, this allowed for high-temperature flash cooking that preserved taste and nutritional value.

Jams and jellies are made from a variety of fruits, either singly or in combination. Most of the fruits are harvested in the fall. The level of ripeness varies. Pears, peaches, apricots, strawberries, and raspberries gel best if picked slightly underripe. Plums and cherries are best if picked when just ripe. The fruit is purchased from farmers. Most jam and jelly producers develop close relationships with their growers in order to ensure quality. The production plants are built close to the fruit farms so that the time elapsed between harvest and preparation is between 12-24 hours.

Sugar or high fructose corn syrup, or a combination of the two are added to the fruit to sweeten it. Cane sugar chips are the ideal type of sugar used for preserving fruit. Granulated and beet sugar tend to crystallize. Sugar is purchased from an outside supplier. High fructose corn syrup is processed by fermenting cornstarch. It is purchased from an outside supplier

The element that allows fruit to gel, pectin is present in varying degrees in all fruit. Apples, blackberries, cherries, citrus fruits, grapes, quinces, and cranberries have the best natural gelling properties. Strawberries and apricots are low in pectin. Jams made from such fruits are either blended with fruits high in pectin, or extra sugar is added to the mixture. Sometimes pectin is extracted industrially from dried apples.

Citric acid is added to obtain the correct balance needed to produce the jam or jelly. Lime and lemon juice are high in citric acid, therefore they are the most prevalent source used. Citric acid can also be obtained by the fermentation of sugars. It is purchased from outside suppliers.

Other flavorings, such as vanilla, cinnamon, mint, alcoholic beverages such as rum or Kirsch, can be added to the jam or jelly. These flavorings are purchased from outside suppliers.

How to keep olivier Salad

Somethings you must know about pickle

Eight Ways to Use Up Ketchup