9Russian Foods You Have To Try 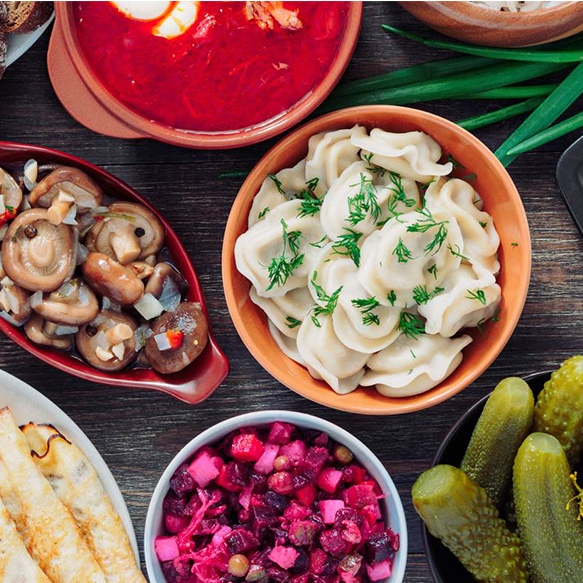 Bread, potatoes and cabbage. The fact that Soviet food shortages have not been forgotten by contemporary Russians is clearly visible through their grocery lists. But although they might not be the world’s biggest experimenters, I can’t bring myself to call the Russian way of cooking unimaginative.

Who else could transform the most basic ingredients into hearty dishes, which can knock you off your feet faster than a swig of vodka? Crisp dough, sticks of butter, rich cream and fatty meat are the distbinguishing characteristics of Russian cuisine – and combined with a sprinkling of dill, they can brighten up even the coldest winter nights. These ten Russian foods you have to try will leave you  leave you hungry and possibly surprised that there is more to Russian cuisine than potatoes and vodka!

Pelmeni are the ultimate drunk food – a meat-stuffed, smetana-covered light at the end of the proverbial tunnel of robotically shaking my booty in an overpriced club. I want to say that they are like tortellini – only better – but this should be taken with a grain of salt, as I don’t recall ever eating them sober.

If you have a sweet tooth or are vegetarian, you might prefer vareniki – a similar dish, which comes filled with potatoes, apple puree or sweet cottage cheese.

Blini are a lot like crêpes, only slightly thicker and possibly greasier. They are also incredibly versatile – they can be filled with meat, covered in cheese or dusted with powder sugar. But the traditional condiments are smoked salmon, caviar, smetana (a thick and heavy sour cream) and dill (a truly disgusting green herb Russians love to put on everything).

Beef stroganoff is made with strips of beef and a thick, creamy sauce. I should be able to give you more juicy details, but the truth is that I haven’t tried this dish yet. I know, I know – I should practice what I preach. But that fact that this dish is popular in faraway places like Japan and Iran makes me feel like it’s an international crowd-pleaser.

Pirogi or the smaller pirozhki are baked sourdough dumplings, which can be stuffed with pretty much anything – minced meet, onion, eggs, potatoes, cabbage, diamonds or unicorns. Well, I’m still waiting for confirmation regarding the last two, but anything is possible in Russia. Pirogi are a perfect snack and you can get them really cheaply, often for less than $1.

You can buy pirogi almost anywhere – you will inevitably find at least one dingy bakery in any bigger metro station. These are fine, but if you’d like to sample some of the most succulent pirogi the world has ever seen, visit Pirog House near the Maryina Roshcha metro station in Moscow.

Golubtsy (which, oddly enough, means pigeons) are stuffed cabbage leaves. They are usually filled with meatballs, but I’ve tried vegetarian versions with mushrooms and rice and those were delicious too. They’re not always served with tomato sauce on top like in the picture, but they look rather unappealing without it. Google it, I dare you.

When I arrived in Russia for the first time, I made a binding pact with myself. “I will eat healthily from now on,” I would announce to anyone willing to listen. I intended to follow through and so I ordered a salad on my first trip to a restaurant, feeling smug and self-satisfied. But when it arrived, my eyes widened in horror. There wasn’t a vegetable in sight – all I could see was a gigantic mountain of mayonnaise.

The moral of this story? Just because it’s called a salad, it doesn’t mean it won’t add five inches to your waist circumference. And who cares if it does – it’s delicious and you’re beautiful just the way you are.

Aside from being a popular Muscovite nightclub, solyanka is also a delicious spicy and sour soup. The list of ingredients sounds a little incongruous – pickled cucumbers, olives, sausage, lemon and cabbage, anyone? – but just trust me on this one.

Borsch hardly needs an introduction – this humble beetroot soup is a bit of an international celebrity. Many countries have tried to claim it as their own and while I’m inclined to say borsch is originally Ukrainian (whoops, there go all my Russian readers…), it hardly matters after you eat the first spoonful. You won’t care if the Martians cooked it after this delicious broth tickles your taste buds!