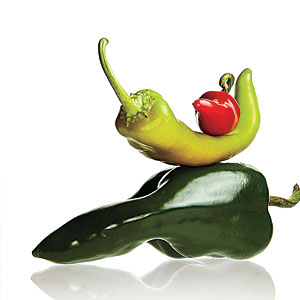 Hot sauce: That spicy, tangy accompaniment to food that some of us just can’t imagine living without. Also called chili sauce or pepper sauce, hot sauce is a perennial favorite with Americans, who seem to put it on just about everything they eat. In fact, all kinds of spicy foods are growing in popularity, evidenced by the array of spicier offerings seen in supermarkets and restaurants these days. Recent studies show that more than 75 percent of U.S. consumers say they enjoy spicy food, which is generally a good thing, because there are real health benefits that come with eating certain spices.

It has also been suggested that hot sauce can help with weight loss — but is this supported by science? Many types of food are said to ‘melt off’ pounds, or contain ingredients that ‘burn’ calories, but it’s important to separate diet myths from fact. And while hot sauce can’t magically remove calories from food, it can help people control weight. How does this work?

Basic science tells us that cutting calories and exercising are still the best ways to lose weight, but certain spices actually can help jump start the process. Many foods produce an increased metabolic rate (the energy being used by the body), such as proteins, carbohydrates, fats, caffeine and other nutrients. Capsaicin, the component of peppers that makes them “hot,” has also been shown to help burn energy. The heat in hot sauce, in effect, raises heat in the body – making the body a more efficient ‘furnace’ that burns more calories. A moderately spicy meal can temporarily boost metabolism by as much as 10 percent.

In addition to helping increase the burn, there are other practical ways eating spicy food can help to control weight gain: With its spicy kick, hot sauce helps one experience a meal more intensely, which leads to feeling satisfied sooner, and thus eating less. The appealing blend of flavors in hot sauce is a great way to manage cravings without resorting to calorie-laden foods.

A study published in the British Journal of Nutrition found that when hot sauce was added to breakfast foods or appetizers at lunch, people not only ate less during those meals, they were less hungry for hours afterward.

And when food is especially spicy, people take smaller bites and eat more slowly. This allows the “full” signals from the stomach catch up with the brain, so they know to stop eating sooner.

Since hot sauce is naturally low in calories (one tablespoon contains less than five calories), it’s the perfect add-in to many dishes. Try substituting hot sauce for butter, which has 100 fewer calories per tablespoon. Soups, stews, sauces and marinades can be flavored with hot sauce instead of cream or meat stock. And if plain hot sauce is not to your liking, try making a simple, nutritious salsa instead.

Remember, weight control isn’t just about what we put on our plates, it requires planning and effort to be successful. Always consult your doctor when starting a new diet and exercise plan